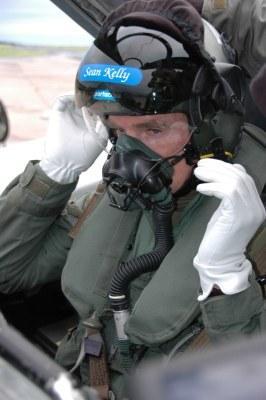 "You have to tense all the muscles in your arms and legs like you're constipated, it's not very dignified, I'll admit" RAF doctor McGrath conceded to the man sitting across from him. Still in his civies, the Hard Man himself, Sean Kelly, was wearing that "tell nothing" poker face he had used so often when he raced. As he listened to the doctor, a slight twitch of his fingers which dangled from his knees was the only sign that perhaps Sean wasn't quite as cool as he looked.

Sean Kelly was taking part in the first edition of the SportActive Challenge in which a well known athlete attempts to do something out of his range. So, instead of donning a cycling kit, he was being custom fitted into RAF flying gear that had to sit perfectly. His head was measured for a helmet which fits so snuggly that when he took it off his ears were bright red. "I think I prefer my medium size cycling helmet. I can sure put it on faster!" joked Kelly rubbing his ears. The compression or g-pants - the Air Force's answer to the cowboy's chaps - went over the regulation jump suit and didn't fit quite as form fitting as a cycling pants but kept Kelly busy with their varied zippers and toggles that gave it a well fitting form. "How do these things work?" mused a journalist and in a flash Kelly was led over to a machine which attached to his pants and started blowing up the compartments. "The pants inflate like this anytime you hit a g-force. When they inflate, they restrict the blood from going into your legs, rather the blood stays in your upper body feeding the organs and also up in your head ... otherwise you would grey out," the fitter explained. "OK, I'll take ‘em," grinned Kelly. You could tell those g-pants were going to one of his closest companion for the next few hours!

Head were turning and whispering was heard as Kelly was escorted to the various rooms for fittings, check ups and a quick lunch. Why was Sean Kelly at the RAF Leuchars base in the first place?

Rewind: Puig Major, Majorca, April 2007. Sunny, 22 degrees centigrade. RAF Flt Lt Marc Peerce is struggling to the top, it is early season and he is not yet in his best form. All of a sudden, as if from out of nowhere, Kelly wizzes by him taunting him in a joking fashion with some remark about his lack of fitness that hurts the Flt Lt more than the screaming burn in his legs at the moment. When Peerce realizes that it is Kelly, he sums up all his energy to catch him and with Kelly playfully pushing him up to the finish, Peerce shoots back a dare. "Come fly with the RAF in a Tornado jet fighter then we will see how much you can take." Kelly and SportActive, for whom Kelly rides 6 weeks a year, took the bet on.

Fast forward: RAF Leuchars base, Fife, Scotland October 23, 2008. The wind is blowing a steady 80kmh. The sky is a deep, forboding grey and in the Commando Station of the RAF, Personnel are frantically trying to push things up. "Weather is getting worse, we have to take off soon." Someone barks. Kelly is now completely suited up even the white gloves are ready. He has been through his physical, had a briefing on what to do in case of emergency, and has met his pilot. The look in his eye is one of fascination at the thought of actually flying in a fighter jet and apprehension "Perhaps it is just too windy to fly? What do you say?" Kelly tests the water, toying with the idea of canceling the flight to anyone who might be listening. "We're on," smiles the pilot, Wing Commander David Hazell. "Come on Sean, let's show you another kind of speed." Martin Birney, MD of SportActive and creator of the idea of the SportActive Challenge pats Sean on the back. Kelly musters up a smile, picks up his helmet and gloves and moves out.

Kelly is escorted out on the tarmac, a camera crew, newspaper reporters and photographers and a good part of the RAF cycling Team are there to greet him. In that company, Sean loosens up again. He jokes with the camera crew. When he is asked if he is scared, Kelly replies. "When they started to instruct me on what I had to do to eject from the plane, I could feel my heartbeat rising, but now I am at the point of no return." He poses with the riders and then is whisked away to the stairs leading up to the Tornado fighter F3. It takes a good 10 minutes to get him fastened in and to go over where the buttons are and what they do. Photographers and film crew are capturing it all, Sean's eyes show an intense concentration. It's the kind of concentration needed to maneuver the pavee during Paris-Roubaix. It's the concentration of a winner. The thumbs up sign from both the pilot and Kelly are the last we see before the plane taxis down the runway and comes back, taking to the air a few minutes later. Flames shoot out of the back of the plane, lighting up the grey sky. The noise is enormous and then he is gone.

Half an hour later the noise and Kelly return. As he dismounts down the plane a big smile breaks over his somewhat pale face. "Wow. That was an experience of a lifetime." is all he is able to get out. The camera crew falls on top of him. Kelly takes of his helmet, his hair is damp from sweat. "The take off was amazing, the force just flattened me back into my seat. I was just stuck there, I couldn't move if I had wanted to." He continued, "You don't know what is happening or how to deal with it at the moment. It was out of my control and that is a difficult feeling to master. That ride took me to my absolute limit. I have often pushed myself to the limit on my bike, but this was something else." "Once we hit clear skies I did get to pilot the plane a bit, that was a wonderful sensation." He concluded.

"Sean did a great job up there. He was happier once we found clear skies as it was really bumpy in the clouds and coupled with that we had a hard landing - two things that are not exactly conductive to sick-free flying." Hazell recalled. Hopefully Kelly had followed the tip from Dr. McGrath and placed his sick bags where he could easily reach them. "You'll be fastened in pretty tightly, don't have the bags on the ground, you won't be able to each them if you need them. Put them in the thigh pockets of your pants, you can get to them easily that way." He had warned during the physical. Wise words, it seems. Walking off the tarmac Hazell teased, "Sean, did you bring your bags with you?" "No way. I left them in the cockpit." Kelly smiled sheepishly. "You're buying the beer tonight then!" concluded the pilot Wing Commander David Hazell as they all entered the commando center.

The SportActive challenge had been successfully completed. Birney was grinning as he got into the car. On the way back to the officers Mess,
Kelly sat quietly in the car intently trying to fix the zipper pull on his jacket. Small talk was on the menu. It was time to let the stress of the previous eight hours dissipate. "You did a great job, Sean." Birney re-assured his colleague. Before we get out of the car, Kelly leans over and says "You know, I think I would take to the bike any day before going back up there again!"

Two hours later, the lounge of the 150 year old Leuchars Officers mess is full. The RAF cycling team, the SportActive crew, the RAF officers are all relaxed. Sean sauters in, the color in his face back to normal. He grabs a hand full of Chinese crab chips, settles himself into a cozy armchair and pops one in his mouth. "I am starving!" he says. "Well, Sean you can have seconds at dinner tonight, after all you're starting on an empty stomach." A journalist quips. Kelly lets out a hearty laugh, "Yes, you're spot on about that. I have every right to have seconds tonight!"