Mont Ventoux – The Challenge the Battle

"The Ventoux is a god of Evil, to which sacrifices must be made. It never forgives weakness and extracts an unfair tribute of suffering."
Roland Barthes, French philosopher and bicycle racing fan.

Mont Ventoux is returning to the Tour de France this year (2016). At 22kms you could be forgiven for believing that the ‘Giant of Provence’s’ reputation as being the toughest mountain to climb is overrated. There are higher climbs in the French Alps. If you are of this mindset think again. Mont Ventoux is unforgiving, and just when you think the ride can’t get any worse, guess what happens.

Here are some elements to consider about Ventoux. Although the temperature varies depending on the time of year you climb it, the temperature at your starting point will be very different when you break the tree line at Chalet Reynard. Ventoux has its own micro-climate and beyond Chalet Reynard you often find that the temperature has dropped a few degrees. Sleet rain can be assaulting you even in the warmer months, and the wind is stronger than you would expect. Other times, you will be hit with a wall of stifling heat.

The gradients on Ventoux are extreme, especially if you start from the Bédoin route. Most of Ventoux is at a steep incline. Most of the time you are riding gradients between 7-10%, but there are long stretches where you will be taking on gradients greater than 10%. You may be able to ride 30kms per hour on the straight, on Ventoux, you’ll be lucky to hit 10kms per hour.

Descending the ‘Giant of Provence’ is a daunting and scary prospect. Some cyclists have hit a 100kms per hour downhill. Riders seem to come out of nowhere, and your breaks are pushed to the limit.

It takes grit and determination ascending it. Nerve and crossed fingers descending it. 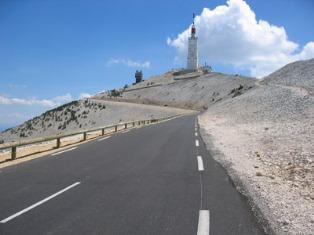 Ventoux is the ‘God of evil’ according to Roland Bartes. His description had to have been influenced by the landscape of the mountain. Standing taller than any other in Provence as if looking down on the entire region with disdain, the leafy villages and tree line gives way to a barren almost moon like terrain past Chalet Reynard. When you emerge past the leafy forest, past the half way point, you may feel you’re over the worst.

The truth is you’re just about to embrace it. Ventoux suckers you in with relatively easy gradients no steeper than 7%. The weather as we have seen is pretty unforgiving but let’s not rule out the sharp winds that can hit you when you make the climb. Ventoux is 1912m above sea level and exposed to fierce wind. If you’ve never ridden Ventoux, you would not have ridden in wind like this before. You could also be greeted by thick fog.

Arguably, the worst part though is the desolate landscape around you. As your muscles are pushed to their limit and your legs become weaker, the unpredictable weather conditions assaulting you, the barren landscape will expose chinks in your armour, challenging your resolve. The landscapes combine with the worst gradients Ventoux has. The mountain knows that if you are going to break it will be now as you push your muscles and your mind to the limit. You will feel an evil creature is telling you to turn back, to give-in and accept your fate.

Ventoux is the mountain the pros respect.

Mont Ventoux has a way of testing your mind as well as your body. 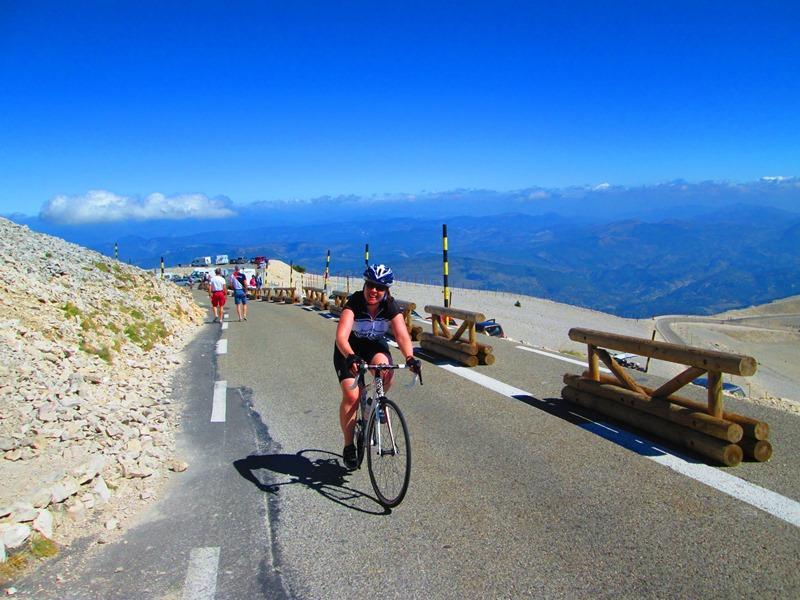 Picture : Fiona reaching the summit of Mont Ventoux from the south side, from Malaucène

In our next series of blogs about Ventoux, we look at three riders the mountain immortalised, and not all are for positive reasons.