Cycling in France – An Overview

For many people, France is the home of cycling. It possesses beautiful countryside and awe inspiring mountain ranges. It has a comprehensive road network which is well maintained. From a cycling perspective, this is fantastic. Smooth roads to ride and natural challenges of her mountain ranges have drawn cyclists from all over the world. The rolling hills and countryside are a great tourist attraction for both cyclists and non-cyclists alike.

The natural challenges France offers cycling has led to the development of the most iconic cycling races. The most famous of which and one of the biggest sporting events on the planet is The Tour de France.

Le Tour was started in 1903 by the magazine owners of L’Auto with the aim of boosting its circulation. The race was ridden in six stages very different to the 21 stages ridden today. The total distance covered in 1903 was 2,482 kms and was won by Maurice Garin with a time of 93 hr, 33m, 14s. The stages ridden in 1903 were a lot longer than those ridden today.

On average each stage was 400 kms. They used to start at night and take around 17 hours to complete. In 1903 the rules allowed riders to abandon a stage and compete in the subsequent stages. Riders that didn’t finish a stage, however, were out of the overall competition. Of the 60 riders that started the race, only 21 finished.

The tour challenges professional cyclists who take on the most challenging cols in France. Although the route changes slightly year on year, the classic cols of La Bonette and Mont Ventoux have regularly featured.The cols do not only test the professional riders. Amateur cyclists and those that want to experience French wonder and beauty cycle them as well. This has led to French cycling holidays, tours, and sportives becoming more in demand from riders who want to emulate the pros by testing their skills in the French Alps and Pyrénées. 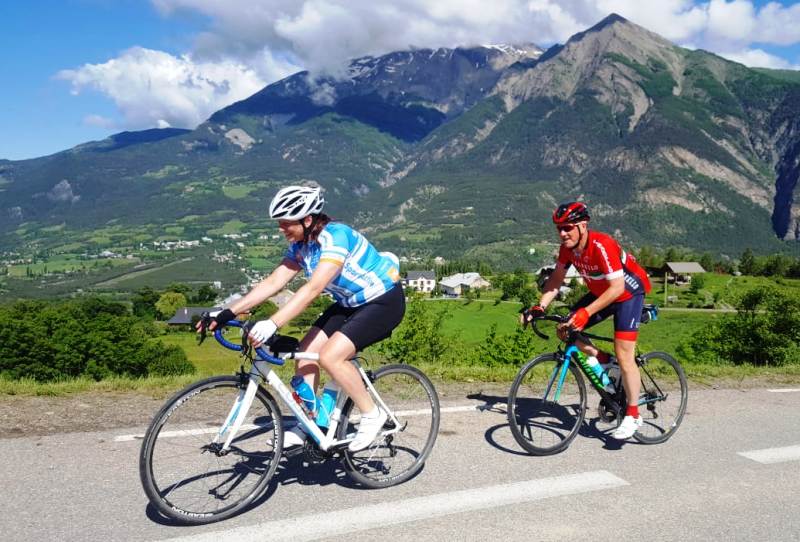 La Route des Grande Alpes is a legendary cycling journey. Starting in Geneva and riding south across the French Alps it culminates in Nice on the Mediterranean coast. Distances vary but it normally spans 550kms. This route is only open in the summer as snow and ice in the winter months close many of the roads.

It should be noted that there is a choice of routes to cross the French Alps. The better tour operators feature the better more famous cols to provide the best cycling experience. Many tours feature at least 10 alpine passes.

SportActive's Geneva to Nice Cycling Holiday. Audrius about to win the king of the hill!

Geneva to Nice offers challenge that cyclists relish. There is pacing to consider as the distance is considerable, there are climbing challenges as you ride col after col, and then there are descending challenges as this is a skill in itself.

One surprising aspect is that mountain life, like city life, has its own culture. Many riders experience this for the first time and it is an enlightening experience. The splendour of the French Alps and the city of Nice are big draws to this particular cycling tour. As is the sense of adventure. It offers riders some of the best mountain views in the world, and it is believed by many that this tour should be ridden at least once in a cycling career.

Once you arrive in Nice many celebrate with a glass of bubbly and swim in the Mediterranean Sea weather permitting.

Mont Ventoux is a col that has inspired philosopher ramblings and has made cycling legends. This unique cycling challenge is believed to be one of the toughest climbs in cycling. It is not just the steep gradients that make Mont Ventoux a tough climb. This col has its own weather system at its summit, so a hot day at the start of the climb can change drastically when you break the treeline at Chalet Reynard.

The last 6 kms of Ventoux appear like a lunar landscape as no vegetation grows here and all that can be seen is barren limestone rock. This can affect you negatively or positively. If you have struggled on the climb the ‘lunar landscape’ may dampen your spirits. Alternatively, with the weather station at the top coming into view you may well feel inspired to keep going knowing you are going to reach the summit.

Mont Ventoux’s legendary status, however, goes beyond the climbing challenge. In 1967, during the Tour de France, British rider Tom Simpson died trying to ride Mont Ventoux. He rode the Mont Ventoux stage after coming under pressure from his manager. A post-mortem showed he had high alcohol and amphetamine levels and it is believed he was suffering from a stomach complaint.

In 1958 Charly Gaul became the first man to win the Mont Ventoux summit finish stage. He won the tournament overall that year and became the fastest man to ride the great mountain. His 1h 2m 9s time would stand for 31 years.

The fastest man to ride Mont Ventoux was Iban Mayo Diez. In 2004 competing in the Critérium du Dauphiné Libéré he achieved a time of 55m 51s. Although he showed promise he tested positive for doping in 2007 and received a two-year ban. He did not return to the sport.

Mont Ventoux has been the scene of controversial battles. One of the most famous is between Lance Armstrong and Marco Pantani. When it seemed clear that Armstrong would win he seemed to give the victory to Pantani. Armstrong's motives remain a mystery to this day.

Mont Ventoux climb from Bédoin: in the last 6 kms after Chalet Reynard

The "Madmen" of Ventoux

Mont Ventoux’s legendary status in cycling circles has led to ‘Le Club des Cinglés du Mont-Ventoux’. In English, this translates to ‘The club of the madmen from Mont Ventoux’. To become a member you must:Ride the three routes of Bédoin to Ventoux, Malaucène to Ventoux and Sault to Ventoux on the same day.

Many tour operators offer riders the chance to do this as a custom cycling tour. If you manage to achieve this you are indeed an exceptional cyclist.

There are many exciting sportives to ride in France. Given her cycling pedigree, they are designed to emulate the Tour de France and other pro events. Two of the most famous that give this Tour de France like experience are Marmotte Granfondo Alps and the newer Marmotte Granfondo Pyrénées. Here, the emphasis is on climbing famous cols that pro riders take on in the big tournaments.

Marmotte Granfondo Alps features riding four Tour de France legendary cols in one day. It is considered the longest alpine sportive in Europe and one of the toughest. Cols include:

Marmotte Alps features a distance of 174kms, 5000 altimetres. The challenges include pacing, climbing, peloton riding, and descending. Very similar to the challenges pro riders face year on year. It is one of the closest amateur cycling events to a pro stage in the Tour de France.

Mamotte Granfondo Pyrénées is a newcomer to the Sportive arena beginning in 2016 but is already forging a well deserved reputation as one of the toughest sportives on the amateur circuit. It is considered the little sister to Mamotte Granfondo Alps featuring cols from the Tour de France and Vuelta. Cols include:

In total riders cover 165km and 5,600+ altimeters ridden in one day. Like its sister tour operators that offer pro-style support are preferred to those that simply offer registration.As Marmotte Alps is ridden in July and Marmotte Pyrénées is ridden in August, it is possible to approach these as separate stages in your own personal Tour de France. This offers a great way to experience both sportives and to savour the splendour of the surroundings. Many riders from overseas stay on a few days after the big events to do that.France has something to offer every cyclist that wishes to test their limits. It offers spectacular scenery as well as challenges that few places in the world can match.